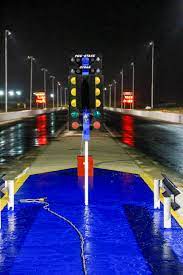 The Drag Racing Starting Tree or Christmass Tree
Has at its top 4 Round yellow bulbs that warn you when you are getting close to the starting line and the “staged” (ready to race) position. This is called the Pre-Stage area.

Staged Indicator Lights
A second set of round yellow bulbs that tell you when you are on the starting line and ready to race. This is the Staged area. The bulbs light up when the front wheels of the car cross a beam of light that goes to a set of photo cells. These cells trigger the timer when the car leaves the light beam.

Countdown Lights
Round amber floodlights that count down to the green “go” light. There are two types of countdowns or starts. The pro start flashes all three lights simultaneously, with a .400 second difference between the amber and green lights. This is called a Pro or .400 Tree. The bracket starts flashing one light at a time, with a .500 second difference between the last amber and the green light. This is known as a .500 or Sportsman Tree.

Green Light
This is the one you’re waiting for. When the green light flashes, it means you’re free to mash the gas pedal and make a run. This is called the launch.

Red Light
If this bottom bulb flashes, you’re out. The red light will go off when you leave the starting line before the green light is activated, resulting in a disqualification. Known as “redlighting”, this action automatically gives the win to your opponent. Most drivers try to begin their launch just as the last of the three amber lights goes off. That puts the car in motion when the green light activates. This is where most bracket races are won or lost, so time practicing your staging and launching techniques is time well spent.

Timeslip
After you make a run, the officials in the little booth at the end of the track will hand you a piece of paper with numbers all over it. This paper is called the timeslip.

The timeslip provides a wealth of information about a run. It tells you how well you launched, how quick and fast you went at various points on the track, and what your final ET and mile per hour were. And if you were racing against an opponent, the timeslip tells you how they did. The DIA system allows for this with our Thermal printer Ad-On. With this information you can have a recorde of your race as well as see the performance of your cars actions and speed.

Car Number
Most cars are assigned numbers at official races.

Class
Marked if running in an official race. Not used for “test and tune” sessions.

Dial-In
This is the elapsed time you think your car will run.

Reaction Time
This tells you how quickly you reacted to the green light on the Christmas Tree. In this case, it is set as a .500 second or PRO Tree. You want your RT to be at or as close to .500 as possible. If you react faster than that, you’ve just redlighted.

60, 330, 1/8, MPH, and 1000 ET and MPH Times
These figures give you the elapsed times at the 60 foot, 330 foot, 660 foot or eighth-mile, and 1,000 foot marks. You also get the mile per hour figure at the 660 foot mark and MPH Quarter-Mile ET and MPH These are your finishing elapsed time and mile per hour numbers. When it comes to bragging rights, these are the ones that count!

Holeshot    In a heads-up (even start) race that would be where the winning car had a slower Elapsed Time than the losing car. This occurs when the winning car and driver leave the starting line sooner then the losing car and even though it took longer to reach the finish line (from the time it left the start to the time it reached the finish) it got there first and won as a result of the better start. In a handicap (uneven start) race such as a bracket race, the same thing occurs additionally taking into account the differences between the handicap times (or dial-ins) and the actual Elapsed Times: The time between the green light coming on (the GO signal) and the car actually leaving the starting line is called the “Reaction Time” and most tracks measure this and supply the information to the driver at the conclusion of the race, on an “Elapsed Time slip” or “ET slip” (the info is printed on a slip of paper). If a driver looks at the results, and sees that he won even with a slower Elapsed Time, he will also see that he had a shorter reaction time. If the difference between 2 drivers’ Reaction Times is greater than the difference between their Elapsed Times, the winning driver can claim that he had a “Hole-Shot Win”. He won because he had a better Reaction Time even though his car was “slower”… By the way: The expression used to explain why the losing (although “faster”) car lost is “He got Treed.” For instance you can say: “I treed that duck with a hole shot…”Awesome! For a wonderful explanation on time slips also SEE THIS PAGE 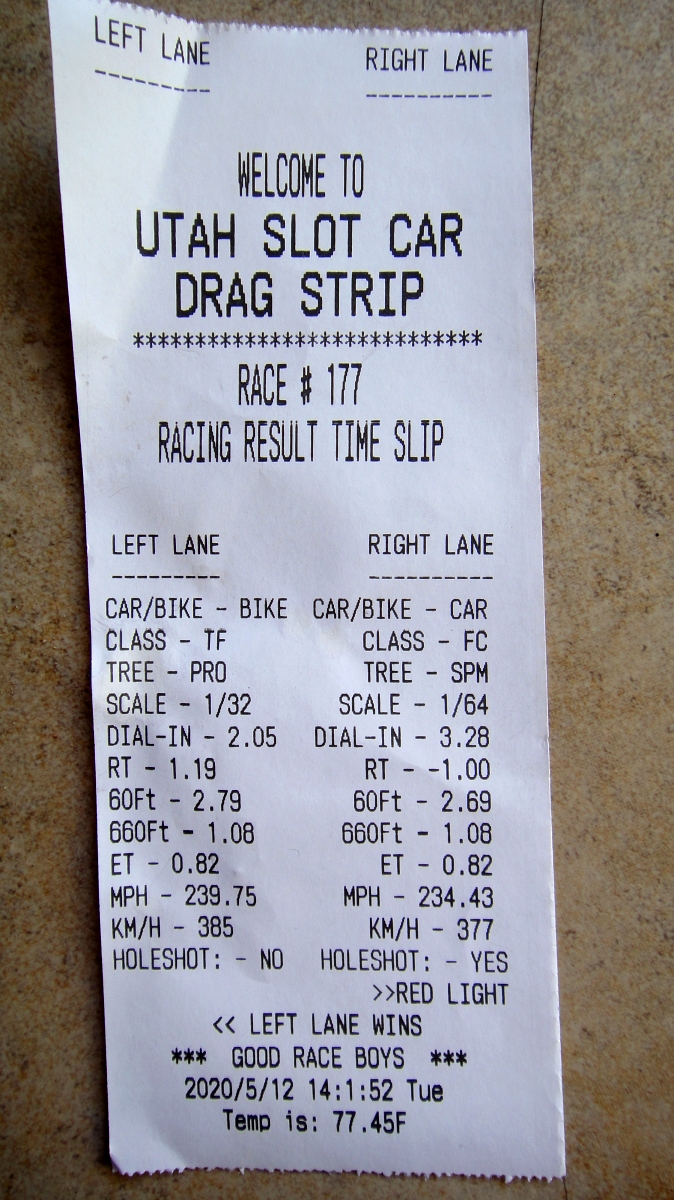 If you purchase the DIA System and a Thermal Printer you can print out your Race Results and check your RT, Speed ET and more.  The example Below shows how it will print out if you select PRINT (POWER BUTTON) on the DIA system. Race #15 Shows a RED LIGHT scenario and Race #21 Shows a HOLESHOT WINNER. 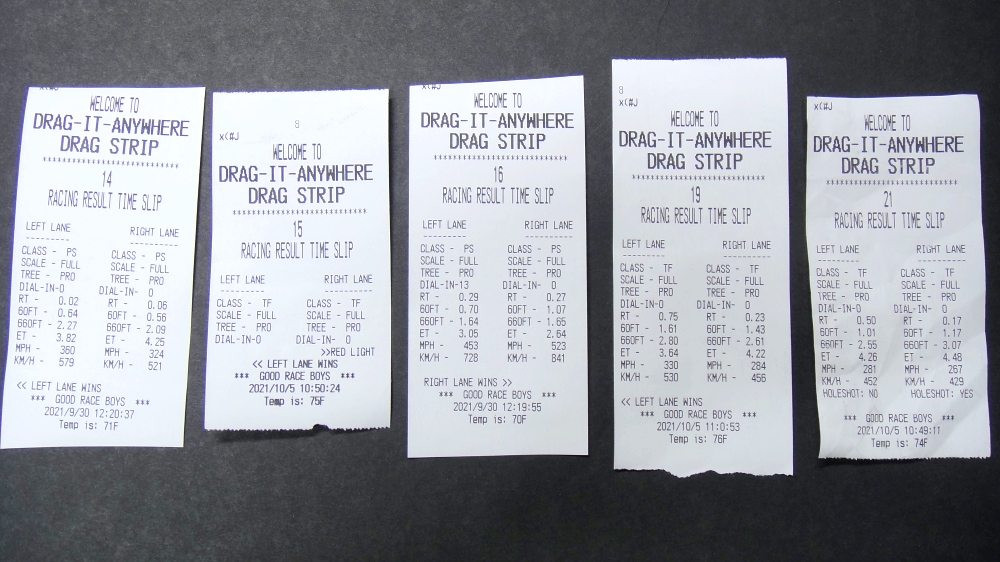 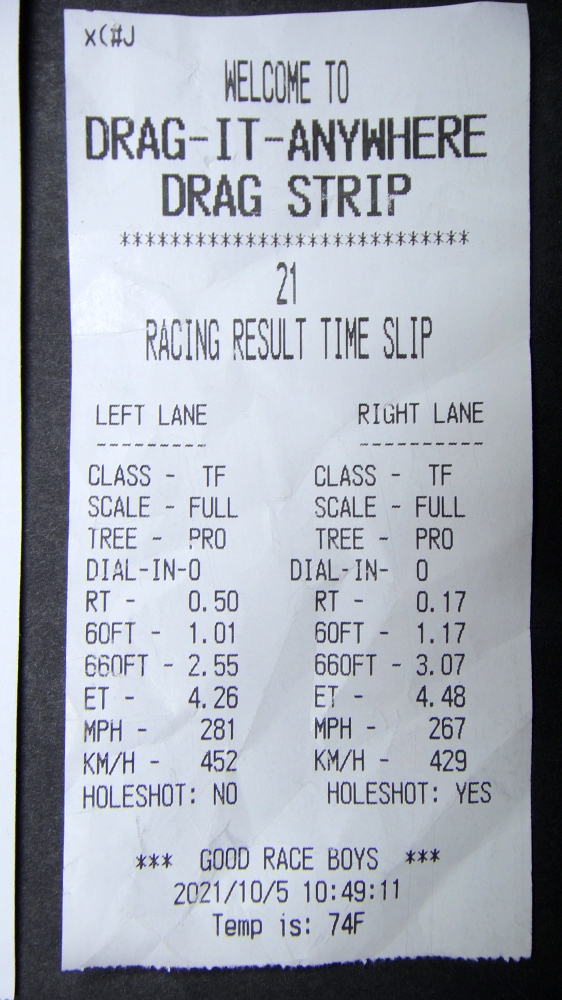