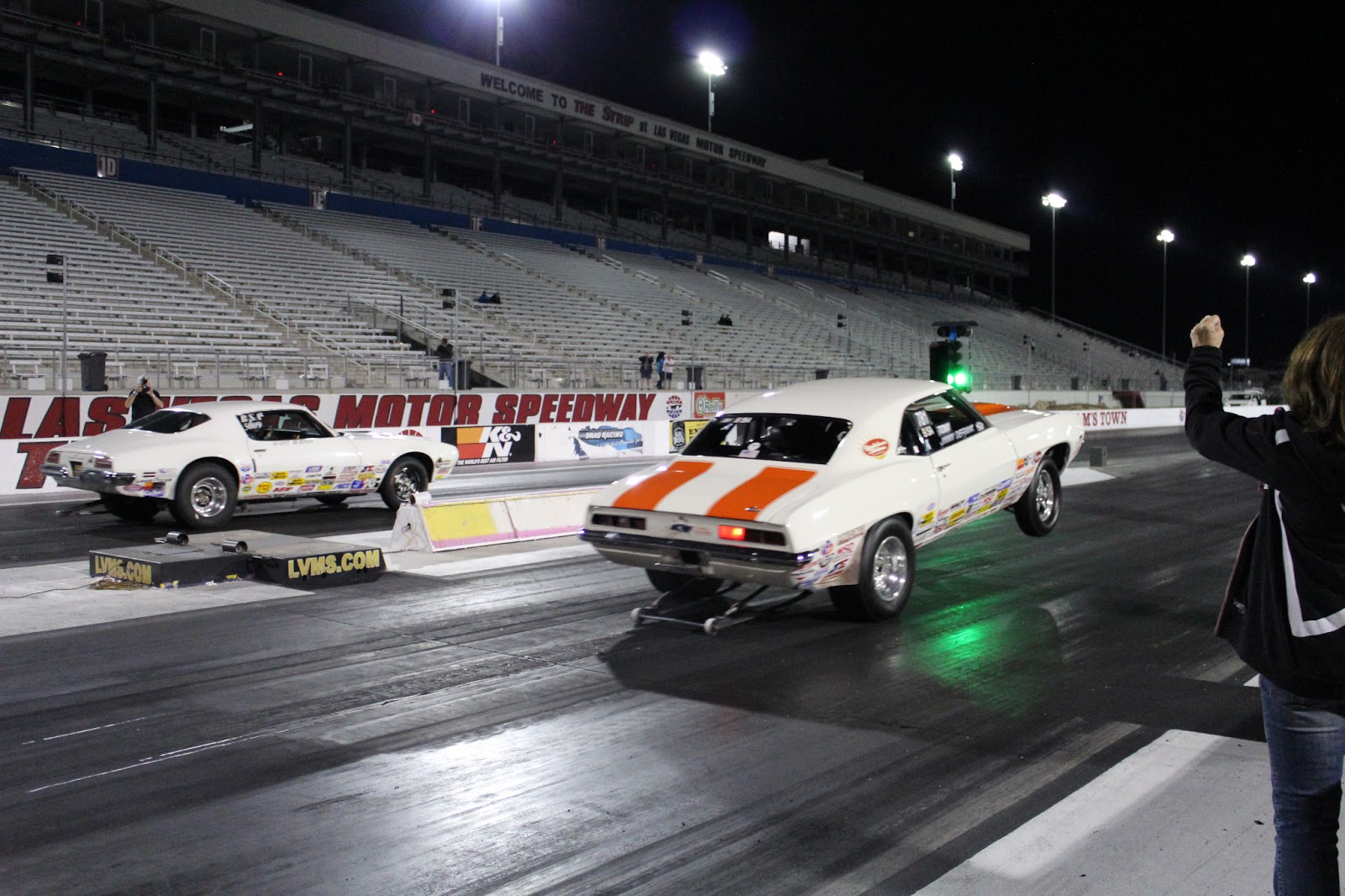 What is a Drag Race?
In basic terms, a drag race is an acceleration contest from a standing start between two vehicles over a measured distance at a specifically designed drag race facility. These contests are started by means of an electronic device commonly called a Christmas Tree.” Upon leaving the starting line, each contestant activates a timer that is, in turn, stopped when the same vehicle reaches the finish line. The start-to-finish clocking is the vehicle’s e.t. (elapsed time), which serves to measure performance and often serves to determine handicaps during competition

What is E.T. Racing?
By far the most popular form of drag racing is a handicapped form of competition known as E.T. bracket racing. In this form of racing, two vehicles of varying performance potentials can race on a potentially even basis. The anticipated elapsed times for each vehicle are compared, and the slower car receives a head start equal to the difference of the two. With this system, virtually any two vehicles can be paired in a competitive drag race.

If both vehicles cover the quarter-mile in EXACTLY THE PREDETERMINED ELAPSED TIME, the win will go to the driver who REACTED THE QUICKEST to the starting signal. That reaction to the starting signal is called reaction time. Both lanes are timed independently of one another, and the clock does not start until the vehicle actually moves. Because of this, a vehicle may sometimes appear to have a mathematical advantage in comparative elapsed times but actually lose the race. This fact makes starting-line reflexes extremely important in drag racing!

What is “Breakout” and/or “Red-light”?
Should a racer go quicker than his or her predetermined dial-in, it is a breakout and grounds for disqualification. If both racers make runs under their dial-ins, the win goes to the racer who breaks out the least. Another form of disqualification is a foul start, or red light. This happens when the racer reacts to the Christmas Tree too quickly and leaves the starting line before the green go signal. When dual infractions occur (for example, a red-light and then a breakout), the red-light takes precedence over the breakout.

Bye Run: If a situation arises when a driver doesn’t have an opponent to run with, he then takes a solo pass known as Bye Run. In most eliminator formats, first round is best suited for the bye runs. During bye run, some of the drivers drive slowly so as not to stress the engine to an excessive point even though the choice of lane in every round is always determined by the time in previous round making the strategy possibly harmful.

Information was provided by  http://www.nhraworldwide.com/nhra-101/et-racing-explained/

If you’re just getting started, reaction time is a great way to prove you sorta-kinda know what you’re doing. And if you’re stuck with a slow car while at a street night with some friends, getting great reaction times will allow you to gain at least some bragging rights for the night.

Let’s learn how reaction time is calculated and what you can do to manipulate it.

What do the reaction time numbers mean?

As you probably already know, when you see “R/T” or “Reaction” or “Reaction Time” on your time slip, it is the time (in seconds), between the exact moment the green switched on and when the stage beam is unbroken (ie your tires stopped blocking the beam).

In the past, the reaction times were shown as the time after the final yellow had turned on. So with a .500 full tree, a reaction time of .500 was perfect because you left exactly when the final bulb was done. That is, the green was now on. A red light looked like .480 on the time slip (or .020 before the green).

The distance in inches (or in milliseconds) from where a wheel begins blocking a beam until it unblocks the beam.

Let’s see how that looks.

The car is now pre-staged, as we can see on the tree. Yellow line #1 has been added to remember where the car when then your tire broke the pre-stage beam.

The car is now staged. The pre-stage beam is also blocked, so both lights are on. Staging the car – turning on the stage light – means you are now ready to race. At this point, you should be prepared for the lights to begin.

It is a given that if you are staged, you fully accept all conditions as they are on track, and you are ready to race. Do NOT stage if you do not accept all risks and conditions of a drag race.

Continue rolling forward and eventually you will unblock (“break”) the pre-stage beam. This turns off the pre-stage lights as you can see. This is called deep staging.

Note the distance you need to travel between turning on the pre-stage beam (first yellow line) and this third yellow line.

Finally, as the car continues forward (or it’s time to go), both beams have been unblocked (“broken”) and both sets of lights at the top of the tree go out.

If the tree had been activated, this is also the exact moment that a) the reaction time is stopped and recorded based on the time between this and the green light; b) the timer begins for all intervals (60′, 330′, etc) including elapsed time (“ET”).

I’ll say it again: Reaction time on your ticket is an independent and completely separate timer.

Note the distance you need to travel between turning on the stage beam (second yellow line) and this final (fourth) yellow line. This distance is called your “rollout” – the distance, in inches, it takes for your car to roll out  the beam.

When using a “practice tree,” or simulated tree, “rollout” usually refers to this distance but uses time in milliseconds instead.

Imagine you went to a different track and the beams were lower (pink). You see how much shorter the rollout becomes (pink arrow length vs yellow arrow length). On a practice tree, this corresponds to a lower rollout time.

If you imagine all the different variables associated with rollout, like tire diameter, beam height, and how far your tire sits in the groove of a racetrack (some tracks have a crown for water drainage), you can begin to see how these things can vary your reaction time and ET. The “arrow” between the lines gets longer or shorter.

If you’re to the point of really looking at your numbers and trying to find hundredths here or there, or chasing consistent lights (your “spread”), your rollout (and all the variables you can control) absolutely matters.

Do I leave on the green light in drag racing?

Here’s why: let’s look at the graphic below of a full tree sequence counting down. The numbers represent the reaction time in seconds at that exact moment. This is you leaving when you see the green.

Shown here (blue bar) it is .230 seconds. Human Benchmark says they’ve calculated it to be .273 seconds, but that the average display has a .030 ms lag, and mobile devices are slower by default. So .230 is probably fair-ish. It takes you .230 seconds for your brain to even realize it’s seeing something and react to it.

Then there’s the physical rollout, as we described earlier. Here, coupled with many other factors about your car, we’ll call it “Vehicle Reaction Time.”

This is the time it takes for your car – once your brain reacts – to get fuel and air, transfer the power through the engine, through the transmission, axles, and wheels, then roll out from the stage beam (which we described just above). I’ve set it to .420 seconds for the green bar, which is about the value of my own car’s rollout when shallow staged.

Finally, there’s the “spread” which is only because we are human and not robots. React to a light 100 times and it will not be the same every time. There will be some variance, and the .050 here (pink bar) represents that natural variance.

Reducing your spread is a valuable advanced drag racing skill. However unless you can stage perfectly every time, and you know your car is reacting the same way every time, plus a hundred other things, it should be far down your list of skills to hone. For now, just try to be a robot.

Anyway, you’ll notice the reaction time here would be about .625-.675 if I tried leaving when I saw the green.

But let’s back that up because that is pathetic.

When to “go” in a drag race

Let’s instead try leaving when we see the third yellow flash (or flash of the pro tree). Bonus points: Can you predict what the reaction time would be without looking at the chart?

Aha! This is looking much, much better. If we try reacting to the flash of the third amber instead, it cuts – you guessed it – half a second off our reaction time. We’ve got a light that would probably be in the .125-.175 range.

The interesting thing here though is that these are not my reaction times when I do this. They’re slightly faster. Because we can anticipate the third bulb (thanks to the other two in our peripheral), the reaction time might be just a bit faster than this when on the track.

You can test this yourself if you have access to a tree. React to a full tree third bulb a few times, then block the top two ambers and try it again.

Now it’s your turn: think about ways to get your spread – or natural variance of reaction times – even closer to the perfect .000 reaction time.

And remember, for both of these runs, your Elapsed Time on your ticket would be roughly the same. All you’ve done is now potentially “gained” half a second on your competition (if they’re leaving on green) just because you understand how the tree works.

As you get more advanced or begin racing in competitions, avoiding inconsistent reaction times becomes more and more important.

Drag the screen to look around! Or better yet, strap on your VR goggles for an immersive 360 video experience on-board a 150mph+ dragster!

3. PUSHED HIM OUT: Successfully causing the other driver to Break Out.

4. TREED” Not having the Starting Line advantage.

9. DELAY BOX: A Timer that adds a Delay between your reaction and Launch time. works with a TRANS BREAK BUTTON: A Solenoid that locks the transmission till released based on the time you input.

10. BREAK OUT: Running faster then your predicted ET Time.