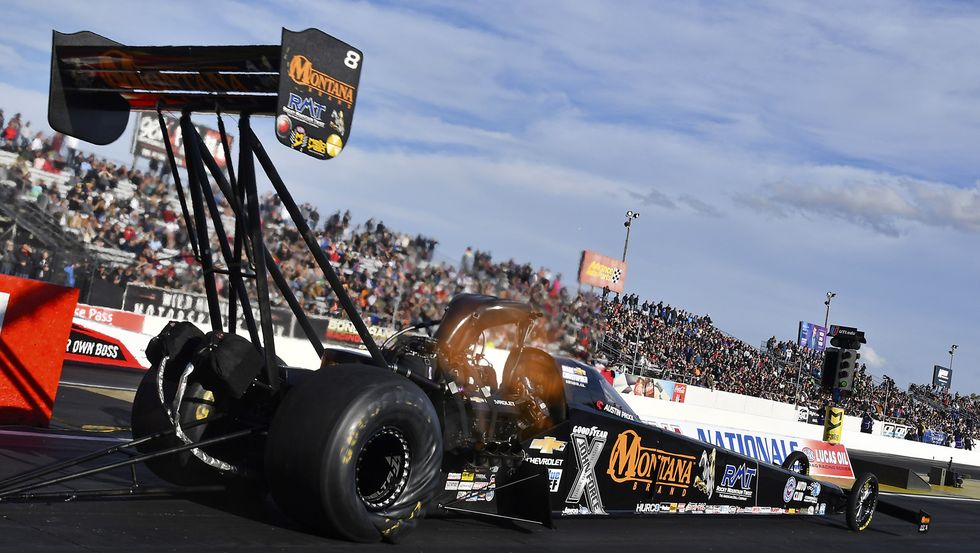 Austin Prock said last week that he’s so thrilled to be campaigning a Top Fuel dragster again, with Montana Brand and Rocky Mountain Twist as his primary sponsor, he was “like, shaking right now, just talking about it.”

JFR team owner John Force said that after he had to park Prock’s dragster, “I fought to get it back, because I promised the Prock family. And Frank Tiegs made that possible.”

Grateful is the perfect word for Prock, who at age 26 is the youngest in the Top Fuel class (last year’s youngest in class was Justin Ashley, 27, who is eight months older).

“I can’t wait to stand on the gas again,” Prock said. “It’s been way too long. Two years was a long time to sit around and wonder if I was ever going to do it again. Now I’m back.

“This is my lifelong dream. I got to live out my dream at 23 years old in 2019, and when that got taken away from me, it made me depressed, honestly. It was tough going out to the racetrack and watching all my peers go and do what I love to do. So I’m happy to be back.”

In 2021, Prock raced at the Chili Bowl Midget Nationals and made a cameo appearance on track at the June NHRA race at Norwalk, Ohio (where he advanced to the semifinals). Otherwise, he spent his time out of the cockpit working with elite crew-chief dad Jimmy Prock on Robert Hight’s Funny Car.

“I worked with my dad, which was really cool. It’s something that not many people get the opportunity to do. Sometimes it can be hard working with family. We didn’t argue once,” Austin Prock said. “We had a great year together, and we both learned about the superchargers. I improved them quite a bit from the program prior. I actually just got done building four superchargers for my own race car, and I just dyno’ed ’em all today. It was a good relief to see improvement.

“Can’t wait to get to the Phoenix test and start burning some nitro again,” he said, referring to the Feb. 10-12 Professional Racing Organization-sponsored Nitro Spring Testing near Phoenix that will precede the 2022 season-opening Lucas Oil Winternationals at Pomona, Calif., Feb. 17-20.

Prock said working as a mechanic again “obviously wasn’t what I wanted to do, but I did enjoy it. Honestly, it turned out to be a great learning curve for me. And when you’re out there as a driver or ex-driver or whatever and you’re busting your ass with all the crew members, they really appreciate that, and they see that. And I think that’s helped build my team and get good employees. They know I want to work just as hard as they do every day.